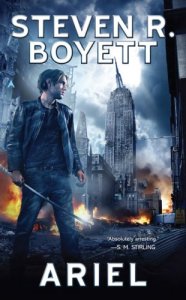 I heard of this book through the Hidden Gems Forum of paperbackswap. Someone had posted about this book as a Gem from their childhood and said it was a story about a boy and his unicorn in a post apocalyptic landscape. I was intrigued. This excellent review at Lost Books cinched my wanting to read it. Unfortunately this book was hard to find because it was last published in 1984, and I had to set up an alert for it to find it at a decent price used. That’s why I’m glad it’s being republished this year, August 25th.

This review is based on what I recall from reading it last year.

The Premise: Pete is a high school student in Florida when suddenly technology stops. Planes fall out of the sky, cars and electricity stop working. Riots begin, and Pete is cut off from his parents who work too far away from his home or school to easily walk. Civilization tumbles into its lowest form – pure chaos and everyone for themselves. Mythical creatures begin to appear, such as Ariel, a unicorn who befriends Pete. To survive Pete and Ariel journey from town to town, and living off the land for food and shelter.

My Thoughts: The narrator of the book is Pete, but the title of the book is Ariel. This is significant, because the relationship between the two of them is the driving force behind the book. In the first part of the book we see how they met and then how the two of them learn how to live off the land by going to libraries and reading. At first things are fine, but Pete is human and fallible. He wants to show off about Ariel. While there are other relationships between man and mystical beast, it isn’t at the same level where they are equals.  So things change when other people learn of their relationship, which a now self-serving society wants to exploit.

Pete has to grow up in order to protect himself and Ariel. But he’s also growing up in other ways, which affect Ariel.  I found him an imperfect character, not always saying or doing the smart or right thing. Sometimes he was meaner than he needed to be. This went along with the sometimes harsh nature of the book. There’s violence, bad people, terrible things happen. But good things happen too. Ariel is a good thing. There are also people willing to help them out, and Pete makes a few friends and learns some self defense and other skills from them.

One thing I wanted to note is that the writing is really well done. One of those authors where you just forget you’re reading, you’re so caught up in the story that you don’t even notice the words, you’re too busy watching what’s going on in your mind’s eye. I had visions of endless walking and desolation but with the company of friends. Even Ilona Andrews (who has her own version of our world without technology in the Kate Daniels series) is a fan.

Overall: The book really leaves an impact, even a year later I feel a bit haunted. It’s not really young adult although Pete starts off as a teen when the book begins; there are some violent and sad things that happen here which are described rather matter-of-factly. There’s a mixture of both hope and loss after reading Ariel. I plan to read Elegy which is the sequel to Ariel, thirty years later. Elegy comes out November 3rd.

The Architect of Sleep

OK, I had to post about this book after I that last book I discussed – because it got me thinking, sometimes I just get a kick out of a really crazy story. Speaking of rather out there books that I liked.. The Architect of Sleep by Steven Boyett is possibly the most out there book I've read in the past few years. I picked this up for 25 cents or something in a thrift store in Sedona last Christmas. It's out of print and Amazon doesn't have an official picture but if you click on the link to the amazon page there is a customer picture. Its somewhat …well I don't know if its a giant cat with an earring or what.. but it was cheap and I recognized the author's name because I'd read online that his book Ariel is worth reading (still have to find that book).

This is the general setup: Jim Bentley goes about his business on a typical day - feeds his dog, makes plans to see a movie with his girlfriend, checks in with work at his nightjob at a 7-11, and then goes spelunking for the day. Then his life is turned upside down when he goes through some kind of weird portal in the cave. Everything looks different, species almost extinct on Earth are plentiful and he can't find a sign of his vehicle or anyone else. And then he meets a raccoon who is much larger than raccoons he knows, and who is much more intelligent – able to use sign language to communicate. Jim says "Need I say it? I was Charlton Heston. This was Planet of the Raccoons". Isn't that AWESOME?!! Hello? A raccoon race using sign language?!? And there's so much more like how the government works and .. OK I think my credibility is going.. Well when I explain it like that – its about a race of intellegent racoons in a world where apes never evolved into humans.. it sounds very kooky, but its more interesting and less laughable to read than it sounds. And most reviewers on Amazon gave it 5 stars, so I'm not deluded, I sweaarr.

The story was very well written – Jim's emotions are believeable and the pace in which he learns about the culture and assimilates the language and what has happened feels real. This is written from the first person objective of both Jim and Truck (the first raccoon he meets). A great deal of thought has gone into explaining the sign language of the raccoons and their verb/tenses, which I found to be fascinating. Their hierarchy and the tale of civil unrest and intrigue was fascinating as well. I would say that the detail in the world building here is very well done, maybe even too well done.. - this book is the first part of a planned series and because of a disagreement with the publisher, there were no more books published. I think the publisher told the author – too much detail, cut out a lot of world-building things and the author disagreed and then bought back his contract. He may be kicking his younger self now though I'm sure at the time he didn't feel like the publisher was right. This is from the author's website:

"A few years ago I reread Architect & Geography. Midway through the second book I found myself thinking, Will you get to the damned point? It was too slow. There was too much detail. Background and foreground had traded places. It was as if my notes for the novel were in the novel. In other words, folks, Ace Books was right on the money in many of their comments. Mea culpa, mea maxima culpa. "

Steven Boyett's website indicates that he is working on the sequel(s) and on publishing it/them. More on that here: http://www.steveboy.com/archetyp.html (I found the whole explanation of what happened fascinating because I'm nosy and want to know that kind of stuff).