I’ve been thinking of doing a bookish gift post that had a specific fan theme, and since it’s the 200th anniversary of the publication of Pride and Prejudice I spent this weekend surfing the web for Jane Austen themed doodads. It should be no surprise, knowing how popular Jane Austen is, that I found a lot of Jane Austen themed objects. This is even with me making sure I wasn’t repeating bookish gifts I had featured here before. Enjoy. (Click pictures for enlarged views). 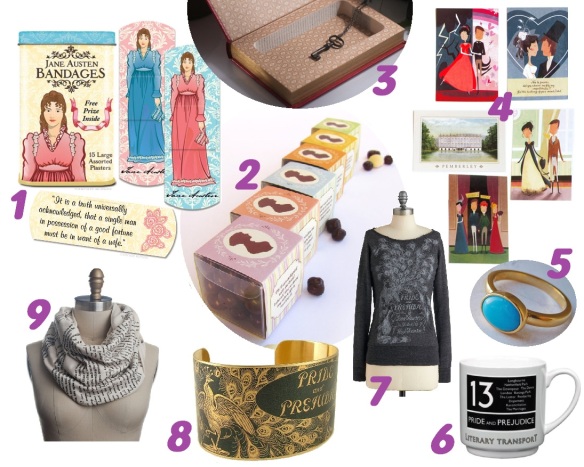 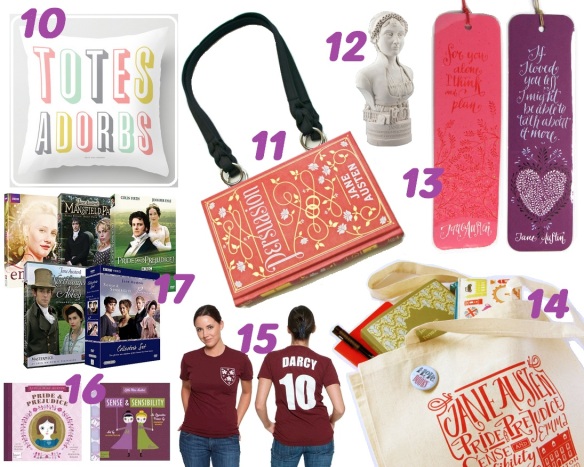 Hope you liked these! If you’re interested in more of this kind of thing, check out the bookish gifts tag. P.S. There are so many Austen-inspired books I could have put here but I restrained myself. And if they existed, I would have included pre-order links for The Lizzie Bennet Diaries and Austenland. Next time.

Yes, I know. It’s been quite a while (a month or two now?) since I changed this blog’s header, and I hadn’t posted about it. I assure you all, I had a perfectly good reason, which was not exactly laziness. I needed to make a couple of tweaks to the design before the official announcement. So even if you have seen the new banner, look again, it’s slightly different!

The artist behind the design is Marion B, aka galaxyspeaking or mevelan. I found her on tumblr because of her Howl’s Moving Castle fanart (yes!) and adored her style and the way she colored her artwork (there’s a watercolor-y dreamy pastel-y thing going on that I dig), so when she was taking commissions I asked her about a header. Marion is the nicest person to work with and she was very open and responsive to my suggestions. The only bump in this process was after Marion got a very demanding full-time job over the summer, which took up all her time (I can relate to this completely)! It slowed things down but she always told me what was going on. Anyway, here’s a peek at the evolution of the banner (greatly summarized):

1) Marion’s first sketch. I wanted something to show the theme of the blog (speculative fiction and romance) but I didn’t have any concrete ideas about a header. She took my vague list of likes (floating islands, Jane Austen, Howl’s Moving Castle, women in space suits) and my request for the blog title to be in there, and what size it had to be, and came up with this. Hello Howl & Sophie, a Jane Austen couple, and space jumper back there!

2) I was worried this didn’t look enough like these characters were from books, so we traded ideas and Marion added some books and pages floating around these figures and added some shading to boot.

3) At this point Marion gave me a couple of options on coloring and lines either something with no/few lines and pastel coloring, or darker lines with watercolors. I asked for something in between, which was watercolors but with fewer lines. She did an intermediary test banner:

4) Then she sent me 4 different colorways:

Of course it took me FOREVER to choose the coloring I liked best. I finally settled on the second one from the top. I felt like this was the right balance in the end – not too pink or yellow or green, just right.

5) Almost done. I ask Marion to put a space in the “specficromantic” title. That’s the banner people saw on the blog. She did this for all four colorways because she is awesome, but I’m just showing you the result for the colorway I liked best.

6) The FINAL (phew) banner has a hyphen, and also slightly different colors because in the spaced one above, they got inadvertently muted (it’s a very subtle difference).

And that’s it. I’m pleased with the finished product. It makes me sigh in appreciation of… the sheer girliness of the romantic warm colors and couples strolling about. In real life I’m not a very pink girl, but the older I get the more OK I am about embracing things that just make me happy, and this does.

I don’t think it comes as that great a surprise to anyone that follows this blog that it’s been in a quiet state for the past few months. I had the best intentions at the beginning of the year to balance the blog with the new job, but somehow at the end of the work day I’ve used up all my enthusiasm for things that require brainpower. I want nothing more than surf tumblr and check my TiVo queue. Ah, sweet laziness, I wallow in thee.

Some of this is that I have to focus on the new job and I should be using my grey matter for that, but some of it is just getting into a funk from not posting for a while. Things were better: after BEA and the BEA Blogger Con, I got some of the enthusiasm back, and I was posting again and visiting blogs I like.

Then this summer I was put in a leadership role at work. On one hand: Kick-ass opportunity. On the other hand: I am figuring out the work-life balance all over again now that my role changed. There are so many more meetings, so many more decisions, so much more email, so much more responsibility. And I’m new at this. Sometimes at the end of my day I just think, “I am exhausted!” but I think once I adjust I will find the balance again. I swear, I see land in the horizon! It’s just not something that happens overnight.

I haven’t read that much this year.  Reviews are taking me longer to write than they used to. I feel bad about that. I’m still working on it. I’m pretty stubborn. I like this space of mine online. I am keeping at it. Consider this post a declaration: “I’m still here.”

So if you have any lovely tips on work-life-blog balance, I would love to hear them. 🙂 I KNOW I’m not the only one who has had to deal with adjusting to a new job, and I wonder what other people do to get blogging in. Work on the blog super-duper early in the morning? Super late at night? Write up a ton of posts in the weekend and schedule them for weekdays? Write partial posts on your smartphone? I need to learn the ways.

One of my favorite people in the world (and partial originator of the ‘janicu’ nickname) came to New York City last week over Memorial Day Weekend. Besides our usual (the MoMA: all six floors, and then food), we visited Book-Off, which is at 49 W 45th St, just a a short walk from Grand Central. 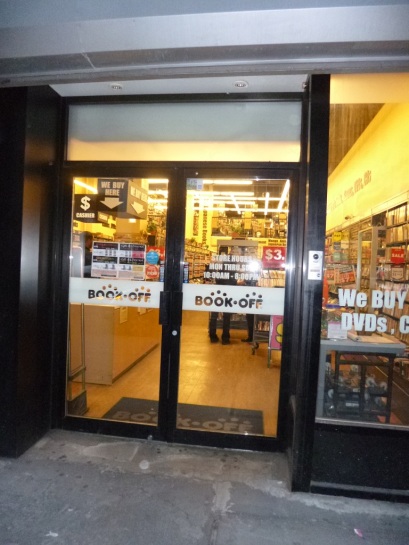 This place is magical. Basically it is a used book store, but it’s a Japanese chain so there are a lot of Japanese books and manga there. There used to be a Book-Off about 10 minutes away from me in Hartsdale, NY but that was a short-lived venture – probably because there were a lot more books in Japanese than English and I don’t think very people really knew it was there. But this Book-Off, the one in NYC? It has plenty of English books. It has rows and rows of used DVDs and CDs in the front, a huge sale section in the back, magazines to one side, and then a floor below with Japanese books and manga, and an upstairs balcony with I think non-fiction (but don’t quote me because I was just glued to the fiction shelves, salivating and petting bindings). Also many books are on sale for $1. MANY MANY books. The books that are not on sale: about $2.50 for a paperback and $5 for a hardcover. It’s not too shabby. I also prefer it over the Strand when it comes to its selection of genre fiction: SF&F and Romance in particular. The Strand does have a bigger YA section and general fiction section, but I think Book-Off beats the Strand’s prices because all the books at Book-Off are used.

You can open the drawers on the bottom of the shelves and there are more books!

Anyway, if you happen to be in New York City, I’m just saying this place exists.

My mind is so pooped at the end of the day by my new job that I’m not quite there yet with the mental fortitude and discipline I need to write reviews (I really am working on that though). Strangely, I seem to have no problems surfing the web and playing with MS Paint. I’ve been having a grand ol’ time putting together another Bookish Gifts post, where I collect cute reader themed things for your favorite book nerd (or for yourself). Here are the fruits of my labors. (As always, click for bigger versions of these pictures, and check the “bookish gift” tag for my previous Bookish Gifts posts). 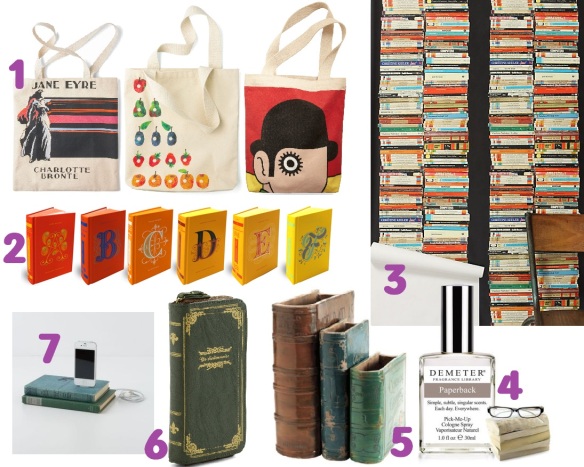 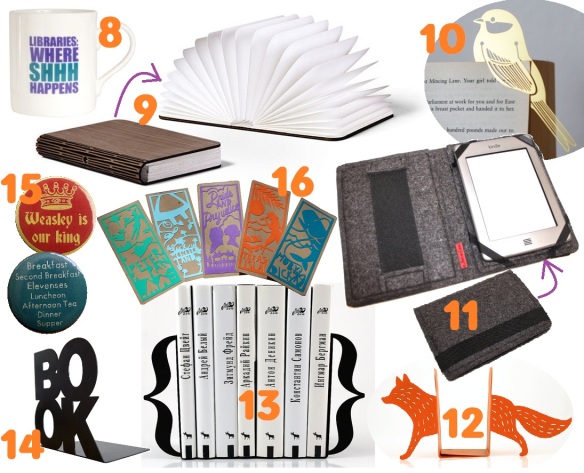 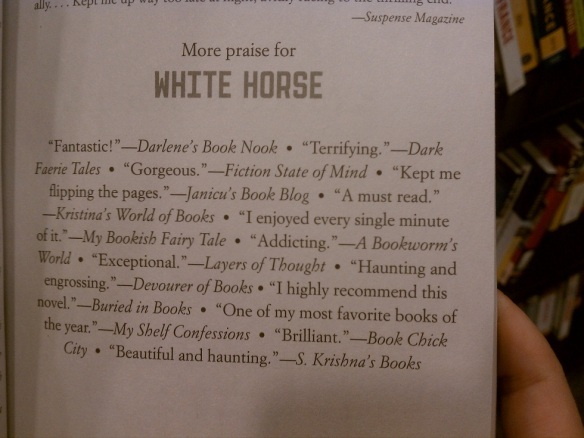 I think it was sometime in January that Kristen from Fantasy Cafe pointed out to me on twitter that I was quoted in the newest edition of White Horse by Alex Adams. Check it out! It’s kind of cool that a lot of book bloggers were blurbed for this one; I recognized a lot of names. This was a first for me though. I’m all kinds of thrilled.

In case you wondered if I was a giant dork, but you weren’t ENTIRELY sure, I reveal the proof in my guest post over at Alyssa’s blog, Books Take You Places, with a post entirely devoted to my November-to-December addiction: made-for-TV Christmas movies. They are my ultimate in guilty (but not really that guilty) pleasures.

My post is devoted to 10 holiday movies I’ve seen so far. Let it be said that I could have easily written about 10 more. Very easily. Something about this time of year makes me positively gleeful about my TV watching options and what’s going to be on on Lifetime, ABC Family, and the Hallmark Channel. 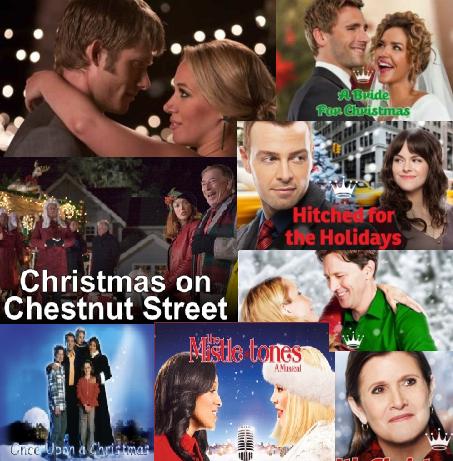 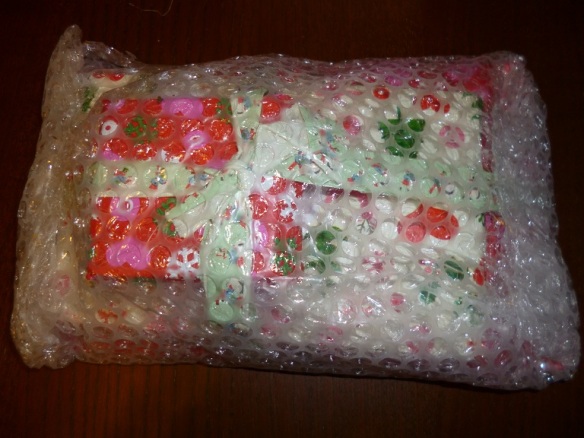 There was a little YAckers Secret Santa this year and I just got my package today. I was thrilled by the thoughtful packaging – double bubblewrap and individually wrapped presents. This was so much fun to open!

Just look at that presentation.

Here’s what was inside:

Thanks so much Sya!

I had so many pictures of the Library Hotel Weekend that I had to break it up into two posts. This part is about the free celebration of literature on the sidewalk of East 41st Street, called Library Way. I took a lot of pictures, on both sides of the street (FYI some of these repeat, so walking a block should yield most of the quotes to see).

This is what the Library Way is (taken from Grand Central Partnership’s website):

“In 1996, GCP, along with the New York Public Library and New Yorker Magazine, convened a distinguished panel of literary experts and librarians to select the quotations from prominent works of literature.

These quotes have been brought to life by urban sculptural artist Gregg LeFevre in beautiful bronze plaques installed in regular intervals in the sidewalks along 41st Street leading to and from the Humanities and Social Sciences Library. The Library Way bronze plaque initiative was subsequently honored with an “Excellence in Design” award by the New York City Arts Commission in 1998.”

This is a image heavy post (there are 45 images of the plaques on the library way here), so here’s a preview. Click it or see after the jump for a gallery with bigger images!

END_OF_DOCUMENT_TOKEN_TO_BE_REPLACED

My guest post highlighting an emotionally strong character in YA is up at Word for Teens today. Choosing what character I wanted to discuss was tougher than I thought it would be, but I finally did it. Head on over to see who I picked, and why.